The New Partridge Dictionary of Slang and Unconventional English

What are VitalSource eBooks?

Prices & shipping based on shipping country 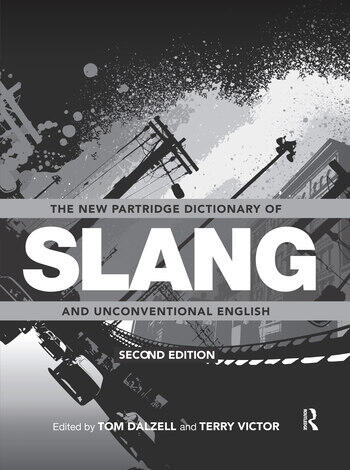 The New Partridge Dictionary of Slang and Unconventional English

What are VitalSource eBooks?

Routledge & CRC Press eBooks are available through VitalSource. The free VitalSource Bookshelf® application allows you to access to your eBooks whenever and wherever you choose.

Most VitalSource eBooks are available in a reflowable EPUB format which allows you to resize text to suit you and enables other accessibility features. Where the content of the eBook requires a specific layout, or contains maths or other special characters, the eBook will be available in PDF (PBK) format, which cannot be reflowed. For both formats the functionality available will depend on how you access the ebook (via Bookshelf Online in your browser or via the Bookshelf app on your PC or mobile device).

Containing over 60,000 entries, this new edition of the authoritative work on slang details the slang and unconventional English of the English-speaking world since 1945, and through the first decade of the new millennium, with the same thorough, intense, and lively scholarship that characterized Partridge's own work.

Unique, exciting and, at times, hilariously shocking, key features include:

New to this edition:


The New Partridge Dictionary of Slang and Unconventional English is a spectacular resource infused with humour and learning – it’s rude, it’s delightful, and it’s a prize for anyone with a love of language.

In addition to this hard back two volume set, The New Partridge Dictionary of Slang and Unconventional English will also be the first slang dictionary available on-line, giving readers unprecedented access to the rich world of slang. For details, including hardback plus on-line bundle offers, please visit www.partridgeslangonline.com

Tom Dalzell is a lawyer who moonlights in an extremely serious way as a slang collector and author. Recognized as the leading expert on American slang, his most recent publications include Damn the Man: Slang of the Oppressed (2011) and Far Out Depends on Where You’re Standing (2012).

Terry Victor is not only a slang collector but also an actor, broadcaster, writer and director. He has written (and acted in) more Murders on the Orient Express than Agatha Christie. Since the 1st edition of this book he has notably appeared in a BAFTA-winning movie and Punchdrunk’s acclaimed immersive theatre, and authored two stage plays: No Offence (2008), and Fragments of Ash "... a supremely intelligent and very important piece of theatre." Informed Edinburgh (2011). A Dictionary of Anglophone Rhyming Slangs is due to be published in 2013.

The country you have selected will result in the following:

This will help us determine what currency and product offerings to display.